Ye was momentarily distracted by Tuesday’s (February 22) Donda 2 listening event in Miami but is right back to mocking Kim Kardashian’s new boyfriend Pete Davidson. On Thursday (February 24), the artist formerly known as Kanye West shared a screenshot of Davidson’s now-disabled Instagram account and reveled in his disappearance from the popular photo sharing app.

“Ran Skete off the gram,” he wrote in the caption. “Tell your mother I changed your name for life.” For anyone unfamiliar with Kanye’s recent antics, he’s referring to his nickname for the Saturday Night Live actor — “Skete” Davidson. The 44-year-old billionaire started calling Davidson that earlier this month when it became apparent the 28-year-old comedian is very much romantically linked to his estranged wife.

Pete Davidson briefly joined Instagram amid Kanye’s targeted tirade. Although he didn’t post anything, Ye was among Davidson’s first followers. Davidson left Instagram in 2018 for his mental health, telling fans at the time, “No there’s nothing wrong. No nothing happened. No there’s nothing cryptic about anything. I just don’t wanna be on Instagram anymore. Or on any social media platform.” He added the internet is an “evil place” that doesn’t make him “feel good” anymore.

Apparently, he either learned the same lesson again or just didn’t want to be bothered with Kanye’s continued attacks. On February 14, the same day Kanye sent Kardashian a truck full of flowers for Valentine’s Day, Ye encouraged his 11.5 million Instagram followers to harass Davidson on site, which evidently concerned Kardashian.

“THANK YOU GUYS FOR YOUR SUPPORT OF MY FAMILY,” he said in a since-deleted post. “MY FAMILY MEANS MORE TO ME THAN ANY OTHER ACCOMPLISHMENT IN LIFE IF ANYONE LOVES ME AND MY FAMILY IF YOU SEE SKETE IN REAL LIFE SCREAM AT YHE LOOSER AT THE TOP OF YOUR LUNGS AND SAY KIMYE FOREVER.”

Kardashian countered in a text Ye shared, “U are creating a dangerous and scary environment and someone will hurt Pete and this will all be your fault. There are dangerous people out there and this is scary and doesn’t have to be,” to which Kanye replied, “I will always do everything to protect you and our family forever. And I listened you and told everyone to make sure nothing physical happens to Skete.”

After the text exchange, Kanye West posted a Baby Boy meme of actor Ving Rhames putting Tyrese in a chokehold with the caption, “UPON MY WIFE’S REQUEST PLEASE NOBODY DO ANYTHING PHYSICAL TO SKETE. IM GOING TO HANDLE THE SITUATION MYSELF.” 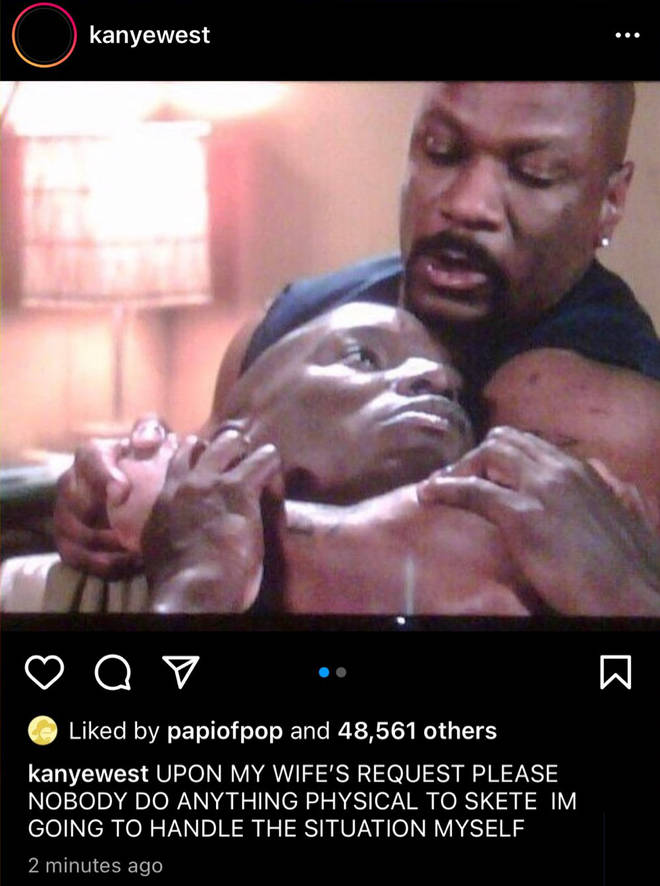 Kim Kardashian and Pete Davidson have been linked since October 2021 when the SKIMS founder appeared as host on SNL. He referred to her as his “girlfriend” in an interview with People earlier this month, something Kanye clearly isn’t happy about.