The Game has come to Nicki Minaj‘s defense after #NoGrammyForGranny trended on Twitter this week following the Grammy nominations being announced.

Nicki didn’t receive a single nomination at the 2023 Grammy Awards, despite breaking numerous records and topping the Billboard Hot 100 with “Super Freaky Girl,” in addition to dropping other hits like “Do We Have a Problem?” and “Bussin.”

Fans of other artists reveled in Nicki being snubbed by making the disparaging hashtag trend with a flurry of jokes at the expense of her and her die-hard fanbase, the Barbz.

The Game, who starred in Nicki Minaj’s “Pills N Potions” music video in 2014, reacted to her lack of Grammy nominations by claiming the Young Money star is the reason why female rappers are flourishing right now.

“This is funny because Nicki Minaj is hands down the reason the female rap game of this era is thriving the way it is!!!!!!!!!!!” he wrote on his Instagram Stories. “Literally nuts mfs act any differently.” 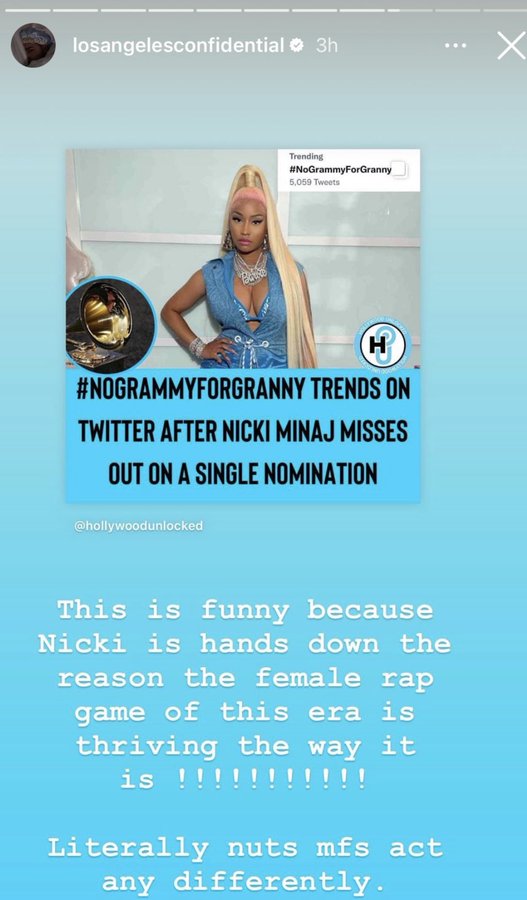 While Nicki Minaj has yet to respond to her lack of nominations, she did vent her frustration at the Grammys in October after it was announced “Super Freaky Girl” had been kicked out of the rap category.

The song, which samples Rick James’ 1981 classic “Super Freak,” was reportedly deemed a pop single by the Recording Academy and instead submitted for Best Pop Solo Performance. Nicki took issue with the decision and argued Latto’s “Big Energy,” which is also built on an ’80s pop sample, should be moved divisions as well — leading to an ugly social media spat between the two rappers.

“I have no prob being moved out the RAP category as long as we r ALL being treated FAIRLY,” she wrote on Twitter at the time. “If SFG has 2B moved out RAP then so does Big Energy! ANY1 who says diff is simply a Nicki hater or a troll. I’d actually LUV 2 c a more street record win- male OR female! IJS rightIsRight.”

She continued: “Could you imagine someone telling you not to ‘complain’ about being treated unfairly at your workplace? This is my job. I work very hard. No diff from a 9-5 where you should speak up for yourself if you know you’re a great employee & continue to be purposely sabotaged.”

In the end, Nicki was denied a nod in the Best Pop Solo Performance category, which will be decided between Harry Styles’ “As It Was,” Adele’s “Easy on Me,” Doja Cat’s “Woman,” Steve Lacy’s “Bad Habit,” Lizzo’s “About Damn Time” and Bad Bunny’s “Moscow Mule.”

Nicki Minaj has been nominated for 10 Grammy Awards throughout her career, but has yet to win. Among those, Pink Friday and The Pinkprint were both nominated for Best Rap Album, while “Moment 4 Life” and “Truffle Butter” picked up Best Rap Performance nominations.

Tagged as female rap nicki minaj the game the grammys

E-40 and Too Short Want Rappers to Stop Instagram Flexing